Between the 3rd and 4th February 1868 New Zealand was hit by a large storm which resulted in a loss of shipping, buildings and roading infrastructure as well as claiming at least 25 lives.

On the night of the 3rd February at Totara Station, near Oamaru, the Waireka Creek suddenly flooded and completely washed away two houses with the loss of nine lives.

In the first house was;

And in the second house, a stone building which had been standing for around 8 years;

The Loudon’s and the other five men were all employees of the Totara Station. 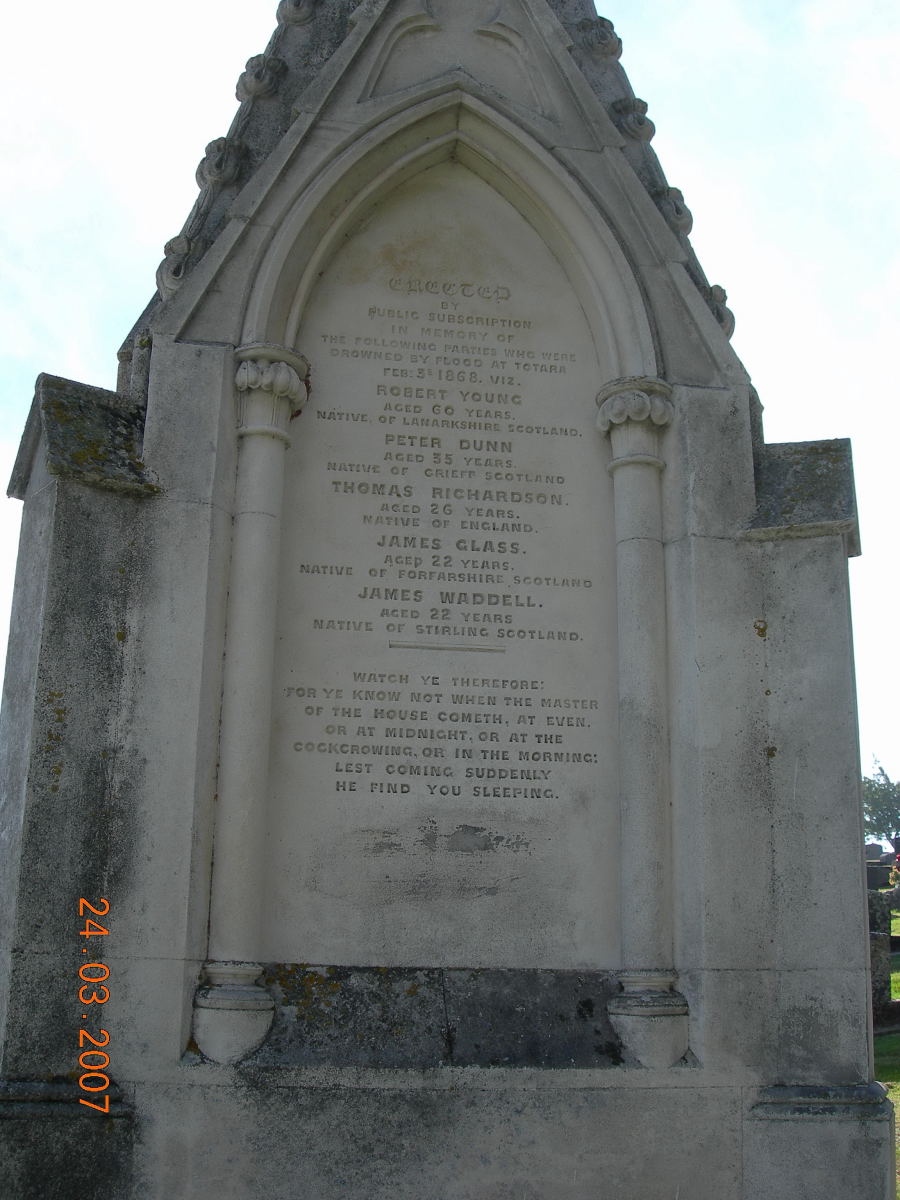 MEMORIAL AT OAMARU CEMETERY - THANKS TO HELEN LANEY FOR THIS.

And then further south:

A Magisterial enquiry was held on the 5th February 1868, at West Taieri, by James FULTON, Esq., R. M., and Coroner, on the body of John CHAPMAN, a labourer, aged about 35, who was drowned on the Whare Creek during the great flood of the 3rd February, when the above creek rose to an unusual height, and the deceased was carried away while endeavouring to escape from an Accommodation House on its banks, in which he was sleeping at the time.

An inquest was held on the 5th February 1868, at the Commercial Hotel, Tokomairiro, by John DEWE, Esq., R. M., and Coroner, on the body of Edwin DRAPER, a butcher, aged about 32, whose death took place at Tokomariro on the occasion of the great flood the previous day. Deceased was on horseback, endeavouring to save some cattle, when his horse lost its footing, and both horse and rider were carried away by the flood and drowned.

According to the book New Zealand Shipwrecks (Various editions C W N Ingram A H & A W Reed) there were 12 shipwrecks over this time period.

ECHUNGA — ship - driven ashore at Napier on the 3rd February and became a total wreck. "There was a gale of wind from the north-east and as the night wore on the storm increased in violence". The crew and the nine wharf labourers who were on board all reached the shore safely after one of them swam ashore with a line. For more on the Echunga see The Echunga Diaries London to New Zealand by sailing ship - 1862.

BREEZE — schooner — went ashore at Le Bons Bay, Banks Peninsula on the 3rd February and became a total wreck. "A heavy gale prevailed at the time". The crew were rescued by the residents of the bay with no loss of life.

STAR OF TASMANIA — ship — on the night of the 3rd February the ship went ashore at Oamaru and became a total loss — 2 children and 3 crew members were drowned. "A fierce storm was raging when the Star of Tasmania broke adrift…" The ship struck the beach stem on and then quickly swung around broadside. The two children, who were passengers, were drowned in their berths and the three seamen jumped overboard and attempted to swim ashore.*

Inquests were held for two of the seamen.

The two children were:

WATER NYMPH — ship — was also driven ashore at Oamaru on the night of 3rd February. It stranded about Ľ mile to the north of Star of Tasmania but all hands were saved.

OTAGO — ketch — was the third vessel to be lost at Oamaru on the 3rd February. The Otago had put for sea before the storm reached its height but she was driven on shore 8 miles north of Oamaru. All hands were saved.

SEA BIRD — schooner — was driven ashore at Amuri* Bluff during the fierce gale. No lives were lost but the Sea Bird became a total wreck. (* Haumuri Bluffs south of Kaikoura ?)

FORTUNE — brig — stranded about 10 miles south of Hokianga during a South East gale on the 3rd February and became a total wreck. Of her crew of eight, only one seaman was saved.

IONA — schooner — during the heavy gale which raged at Lyttelton from 2 to 4 February several small vessels came to grief including the Iona which was driven ashore and became a total wreck. There was no loss of life.

THREE SISTERS — schooner — was also driven ashore and totally wrecked at Lyttelton. There was no loss of life.

WILLIAM MISKIN — steamer — early on the morning of the 4th Febraury was driven ashore at Timaru, becoming a total wreck. One crew member was drowned.

GLITTER — cutter — heavy rain caused a sudden rise in the Thames River on 3rd February and a number of small vessels were driven from their moorings and carried out to the sandspit. The Glitter was driven out to sea and became a total wreck at Tararu Point. There was no loss of life.

CHALLENGE — ketch — was driven ashore at Le Bons Bay on the 4th February. The master and mate could not withstand the sea and the boat capsized. The mate was drowned and shortly afterwards the Challenge was a complete wreck.

If anyone has any further deaths from this storm please do not hestiate to let me know.

With thanks to Bill Martin and Helen Laney for their help with this.

* -From White Stone Country — the story of North Otago by K.C. McDonald Published by the North Otago Centennial Committee in 1962.

p.114 -A fortnight later the jetty had ceased to exist. It perished in a night of disaster without parallel in the history of North Otago.

Sunday, 3 February 1868 was a day of grey skies heavy with threat. Although there was no wind the sea was tumultuous, and people went down to watch the great rollers breaking on the beach. In the evening it began to rain, at first a thin drizzle and then a steady downpour which continued all night. The wind came early in the morning, a fierce gale from the south-east, and throughout Monday rain and wind were unceasing.

There were four ships in the bay. Two of them, the Star of Tasmania, of 632 tons, and the Water Nymph, of 583 tons, were big vessels by the standard of the day. They were loading wool for England; already the Star had over two thousand bales aboard. The other vessels were small coasting craft, the Otago and the Emu.

At noon Captain Sewell, the harbour master, hoisted the signal for the ships to put to sea. The Emu went at once and the Otago soon after. The big ships lingered and it was said later that the signal could not be seen clearly through the rain. About half past three the Star of Tasmania snapped the chain which held her to the moorings. She drifted about four hundred yards, but her crew got an anchor down; then they hauled in the broken chain and dropped the other anchor. For some time she was held, but she was pounding heavily in the sea, and presently both cables parted. About seven o’clock she struck the beach opposite the end of Torridge Street. She took the ground stern on, but swung around broadside to the shore with her head to the south, and fell over towards the sea. The decks were thus exposed to the full fury of the waves.

There were twenty-two people on board, including four passengers — Mrs Baker, the wife of J.P. Baker, an Oamaru chemist, her two small sons, and a boy named McLean. They had been secured in the forecastle for safety, but water poured through the shattered timbers and drowned the two little Bakers in their berths. The others climbed out on to the starboard bow where they clung precariously. The ship was beating dreadfully on the shingle and soon the after part broke away. Floating planks, hurtled about by the waves, were a menace in themselves, and both Captain Culbert and the mate were injured.

A large crowd, assembled on the foreshore, watched in the pouring rain and howling wind which drove the spray in their faces, like, it was said, showers of needles. The mate, Stephens, jumped into the sea with a rope; a receding wave left him on hands and knees in the surf, and he was quickly pulled to safety. But he had lost the line. Three members of the crew also tried to reach shore; one succeeded, but the other two, David Petrie and William Brookes, were washed out beyond the ship and drowned.

It was now dark, and a great fire was lit on shore to light the scene. The hours dragged by, and it was not until half past ten that at length, aided by the falling tide, men were able to get near enough to throw a line on board. Then, with difficulty and danger, one by one the crew came ashore along the rope. The mate went back to the ship to bring Mrs Baker and the boy McLean.

Meanwhile the Water Nymph had broken her chains about nine o’clock, and came ashore about three hundred yards north of the other ship. More fortunate, she canted towards the beach, and all her people got to land safely. The little Otago also came to grief. She had got out to sea a distance of five or six miles when her rudder-head snapped. Out of control, she was allowed to drive ashore near the mouth of Boundary Creek. The crew landed with difficulty but were able to save nothing from the wreck.

The morning revealed the fragments of the broken ships, and wool and debris strewn along the beach for miles. It revealed something else; the jetty, which had cost ₤14,000 and had hardly come into proper use, was a shattered wreck. Only about sixty feet of it, the middle section, stood; the rest was a mass of twisted iron. Seven surf-boats had been destroyed.

Then in the course of the morning news began to come in of a still greater tragedy that had been enacted, a few miles away, on that terrible night. Where the main road crosses the Waiareka Stream, on the south bank and on the east side of the road, stood two houses, one of stone and one of wood, occupied by employees of the Totara estate. In the stone house lived Robert Louden, his wife, his son James, and a little girl called Annie Smith; in the other the occupants were Robert Young, Peter Dunn, Thomas Richardson, James Glass, and James Waddell. Across the road and a few feet higher was the house of Robert Macaulay, the manager. About eleven o’clock Macaulay and his wife found water racing through their house and fled hurriedly. It was probably about the same time that disaster struck the other two houses. In the morning it was discovered that they, as well as a forge that stood near by, had completely disappeared, and that all nine persons in them had lost their lives. It was thought that the flooded stream had been dammed by the remains of straw stacks lodging against an obstruction; when the barrier broke the water rushed down irresistibly. In the diary kept at Teschemaker’s Taipo estate some distance downstream there is a grim note under 4 February: "Hands watching the banks for drowned persons, washed away at Totara. Found two."

The little Bakers lie buried near the main gates of the Oamaru Cemetery, the grave for long surrounded by a fence made from the timber of the vessel in which they died. Nearby lies the Louden family. Close to the southern entrance is a large stone memorial erected in memory of the other five men.