Updated Thursday 23 January 2014. Thanks to Michael Coleman and Allen Shaw. 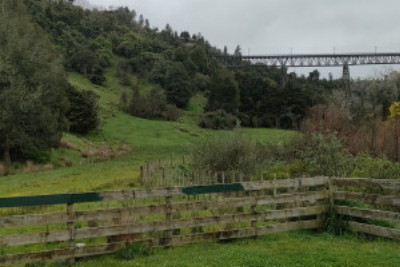 Makohine Viaduct - August 2020 - the flat area beside the fence was the original SH1 road before it was realigned. Looking toward the site of the slip

Near the Makohine Viaduct on State Highway One between Ohingaiti and Hunterville a sad tail emerges of a family almost wiped out during construction of the Main Trunk Railway Line.

Three Quillinan brothers (Patrick, Matthew and Thomas, sons of Michael and Margaret nee D'Acy of Wellington) were employed by the railways on construction work. At Makohine there was a tunnel on each side of the large viaduct and the families lived in a temporary camp near the Makohine stream. The accomodation consisted of tents with wooden walls and clay floors. They were very basic but Patrick's wife Catherine and Thomas's wife Hannah had each other for company.

On the morning of Monday 13 November 1893 Hannah and Catherine were busy with their campwork, Catherine was baking bread in the camp oven and the children had gone out to play in the rata vines that grew from the trees behind the camp site. They used them to swing on.

Around 9 am Hannah and Catherine heard a loud cracking noise from the slope behind the camp. Hannah ran to the children while heavily pregnant Catherine saved Hannah's baby Catherine (Katie) and her son Michael, who had been sent back to the camp from the rata vines by the older children as he was a 'nuisance'.

Catherine saw all the children and her sister-in-law engulfed and was able to show the men exactly where each body was. The slip measured 6 chains wide and was 10 feet deep and covered the road, now State Highway One.

A later enquiry found that the slip was caused by the weight of the earth excavated from tunnels and cuttings on the railway works above the campsite. Some weeks later a deputation waited on the Prime Minister Dick Seddon asking for compassionate allowances for both families. He told the group that a warning had been given that the site was not safe, but although the department was in no way legally responsible he would recommend to the Cabinet the granting of Ł50 per annum to the surviving daughter until she was 21, and a payment of Ł200 to Thomas and Ł100 to Patrick. Shortly after the New Zealand Herald (14-15 November 1893) published a letter from an irate taxpayer saying that the girl would have drawn almost Ł1000 by the time she was 21.

Dick Seddon offered to adopt the baby Katie but Thomas wanted her brought up in the Catholic faith and she spent her early life at the Sacred Heart Convent in Wanganui. She is said to have gone to Australia before World War One where she married and was known to be living in Sydney.

Thomas Quillinan never fully recovered from the tragedy and died in 1917. He is buried in the Taihape cemetery but his death certificate says that he was 'not married'.

The bodies of the Quillinan family were taken by train to Wanganui and were buried in the Catholic section of the Heads Road cemetery.


And also in the Heads Road Cemetery, Wanganui.