THE SINKING OF THE YACHT "MINERVA"
SUNDAY 02 OCTOBER 1892
WHANGAREI

The yacht Minerva was struck by a squall about three miles off Marsden Point just opposite One Tree Point at Whangarei on Sunday 2 October 1892 and eight of the nine men on board were drowned.

The yacht was owned by Mr J P TUCKER, a coachbuilder of Whangarei (and a nephew of Mr C BAILEY of Auckland) and had recently been brought from Auckland.

The accident was observed by R SCOTT and H GOING who were also out sailing. They immediately sailed for the place where the yacht sank. After about an hour they reached the spot and were able to rescue John A PEARSON who was still swimming, though almost exhausted.

The body of Edwin G Courtney was recovered a few days later and the North Otago Times of 19 August 1893 (nearly a year after the accident) records that "The skeleton found at Whangarei Heads is fully identified as that of Ramsey, which is to be buried at Kamo cemetery with the other victims of the Minerva yacht accident". The inquest for Edwin Courtney recommended that Messrs SCOTT and GOING's services be brought to the notice of the Royal Humane Society. 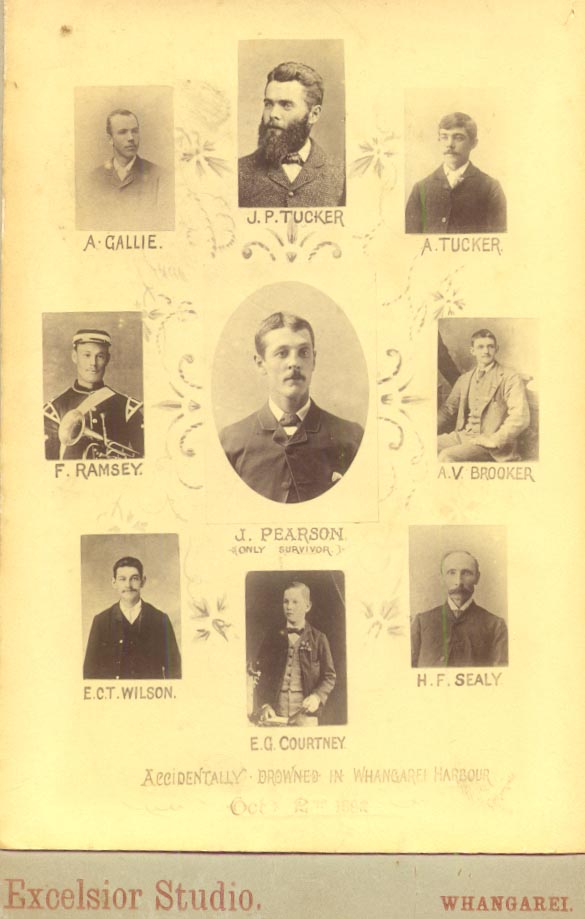 Thanks to Elaine Bell for this commemorative postcard.